Anthropologists are the scientific storytellers, the narrators of “culture.” But their own stories and experiences of research are often left untold. To ignore the researcher as the grounds for the encounter is both impossible and undesirable. By way of addressing this phenomenon, what follows is an ethnographic fiction series by hypothetical anthropologists, working through the emotionally demanding experience of fieldwork and the challenges that can arise. This collection poses questions such as, how far are you willing to participate for your research? Is it justifiable to push the boundaries in order to find Self in Other? Who is the research really about? These stories are turning the critical gaze back in and at themselves, in order to explore the arduous but often amusing life in the field. 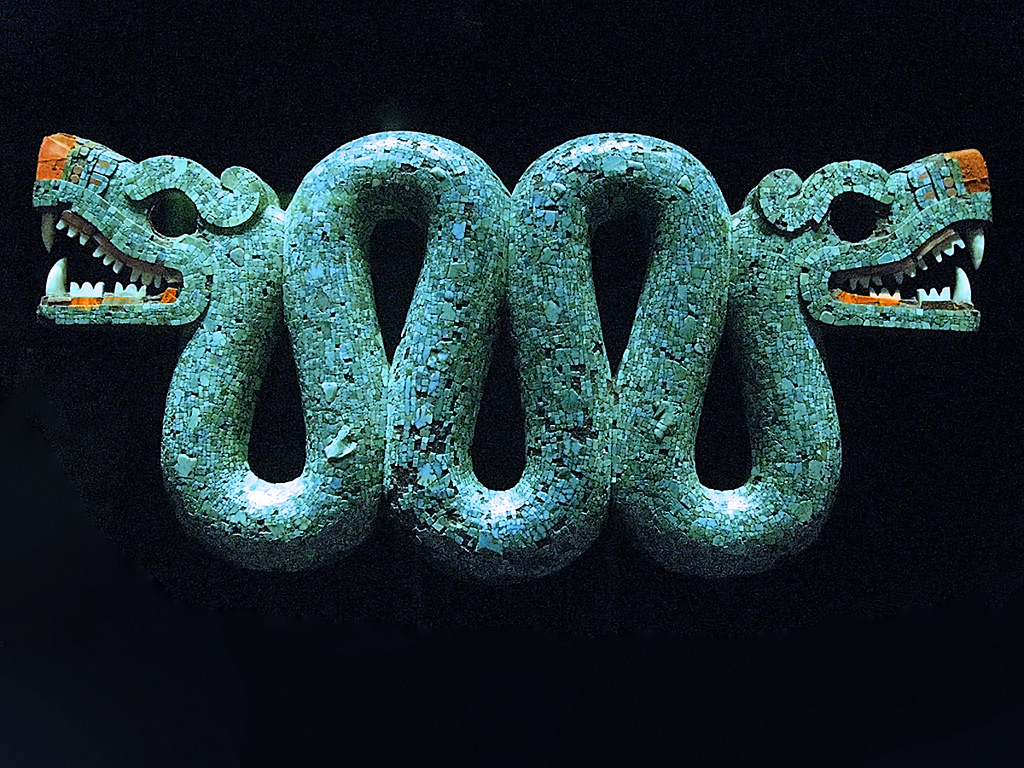 Aztec sculpture of a double-headed serpent

“Entwined Serpentine I am”

I have never smoked a joint, and certainly never anything stronger! So when Raoul, a powerful and well-respected shaman, invited me to partake in a tobacco and Ayahuasca ceremony in the depths of the Amazon, I hesitated, but not for long.

What I had done was read. Read about the fascinating properties of Ayahuasca; its hallucinogenic and healing qualities, the myths it inspires and its ontological and cosmological significance. One text in particular on this subject really resonated with me. Jeremy Narby, a trained cultural anthropologist, wrote The Cosmic Serpent over the course of many years after completing multiple stages of research in the Peruvian Amazon. To briefly summarize his extremely rich ethnography, Narby concludes by hypothesizing that Amazonian Indians knew that knowledge could be transmitted through DNA centuries before Western science. This knowledge they gained from hallucinations that occurred during Ayahuasca ceremonies. In this way the knowledge was communicated to the shaman through the plants!

My first of many Ayahuasca ceremonies was by far my most memorable. What I experienced not only changed the course of my research, and dramatically impacting my subsequent career as an anthropologist, but as clichéd as it sounds, it changed the way I looked at and lived life. I am sure many researchers say the same of their experiences in the field, but I dare say not to the same degree. I was enthralled, enchanted, enlightened. In Narby’s words, ‘my encounter with the florescent snakes had modified my way of looking at reality.’1

Ah, the snakes! The entwined serpentine! The reptilian repetitions that fuelled and filled my visions! Doubling down and ever down into a kaleidoscopic snake pit where binaries exploded into infinities. Where I slithered with them, scaling their scaled backs until they slithered and scaled me, coupled coiling and Medusaian multiplications of ultra and aquamarine. Helter skelter, down the dual halcyon helixes I went, stopping and slipping along cubic ruby tongues and auriferous eyes; two pairs to stare back at me from the Obsidian jungle. At once terrifying and comforting, the Twin Mothers of the Universe, gifting tough love to the two-legged who come seeking. Whole lithe single-limbed bodied skins flaked and fluttered around me. Her head doublet won’t let me forget. I swung on the ladder of the galaxy, swam up and out, returning to dull reality.

It is hard to discuss these profoundly metaphysical experiences without the assistance of poetic prose, and even then language itself falls short. It is beyond representation.

I had originally come to the Amazon Basin to study indigenous linguistics across the region. Raoul told me that to truly understand the language of the jungle I had to be initiated in, through the Ayahuasca ceremony. First and formally, it is an invitation to listen to an ancient and indigenous alphabet sung in colour and form. The hope of understanding is reserved only for the most respected and powerful shamans. The knowledge gained by these shamans is then disseminated to the rest of the community. The fact that their epistemic system is built on a shared phenomenological experience is truly extraordinary!

I spent the next month focusing solely on the task of understanding indigenous Amazonian epistemology, speaking with Raoul and other community members at length. I realized I had barely scratched the surface and if I really wanted to understand I had to change my research all together. This meant persuading my supervisor. It meant more money; it meant writing a new grant paper in the jungle. Was this really a good idea? I had a strong research topic that was fully funded and I had arrived prepared, having extensively study the accompanying theory. Many ethnographers do indeed shift their research once in the field, but not by entire schools or disciplines. The leap from linguistics to epistemology is paramount to a paradigm shift. Should I make this change purely because I wanted to? ‘I’. ‘Me’. How far should my desires guide the research? And if not my desires then what?

My slippery friends drove me forward. To start research afresh I re-read Cosmic Serpent, one of the few books I brought with me to my field site. Insect repellent and hiking boots were far more imperative than Inoue, Geertz and Boas. I read, I conducted interviews, and I participated in 5 more ceremonies. Just as I was reaching a base comprehension, ready to delve into the infinite search of how we know what we know, my funding was cut and I had to retire my leafy, magical jungle for the sober and ashen concrete. The problem was that I didn’t wait to hear back from the board with approval. I forged ahead with participating, observing, listening, learning, not wanting to waste any precious time. Had I continued researching Amazonian linguistics I could have stay in my new home, the only place my eyes and ears were sincerely open. That reality was over; back to the day-terror of the blind pretense and pomp, of science’s glare and spirits silence. Yet in my mind it would all remain, retained forever.

When writing this story, knowing it was to be a personal account, I come back to the ubiquitous yet singular ‘I’. I asked myself who am I? Who am I? I am. Why am I? I am because of DNA. I am who I am, because of my genetic information carried in my DNA. Every living thing consists of DNA and is who they are because of DNA. Animism, the ontological belief system of the indigenous Amazon, teaches that all living things share the same interiority. Western science, and the discovery of DNA confirmed this, yet we still live in a paradigm ruled by naturalism and rationalism.

DNA creates individuality whilst also forging and retaining connections of relatedness and similarity. It is the ultimate source of information, and as Narby states, ‘the molecule of life.’2 We are all familiar with its shape, the double helix, resembling two snakes entwined. It is also self-duplicating like the serpents in my visions. Perhaps this helps explain the title of this story: ‘Entwined Serpentine I am’, I am DNA and DNA is the entwined serpent. What is probably less well known is the name of the compounds that compose and comprise DNA: Adenine (A), Guanine (G), Cytosine (C) and Thymine (T). Is this what I had been seeing? Adenine eyes and cytosine slithers? Glowing guanine, and thymine tongues? AT twins and GC couples!

Perhaps my account of my Ayahuasca experience should take another poetic form. As I said earlier, it should speak a different language:

What is displayed above is but the most minuscule, minute example of DNA sequencing of a human genome. Just like Ayahuasca, DNA has its own mesmerizing dialectic and vocabulary. It is the fundamental language of the universe, the abstract poetic of life itself!

I have toned things down a bit in recent years. Only so many times can one passionately assert that Amazonian communities had intimate knowledge of DNA for centuries essentially because the plants told them so. The pile of rejected research grants keeps the fire well fed even today. That being said, Jeremy seems to be doing ok, he has since become one of the world’s leading indigenous rights activists and has even encouraged molecular biologists to join him on fieldtrips to the Amazon to explore their knowledge systems! I had less luck. I suppose having a few books under your belt helps.

Nowadays I co-habit with a snake. He lives under the decking in my yard, and that is where he will stay. Perhaps his twin will join someday.